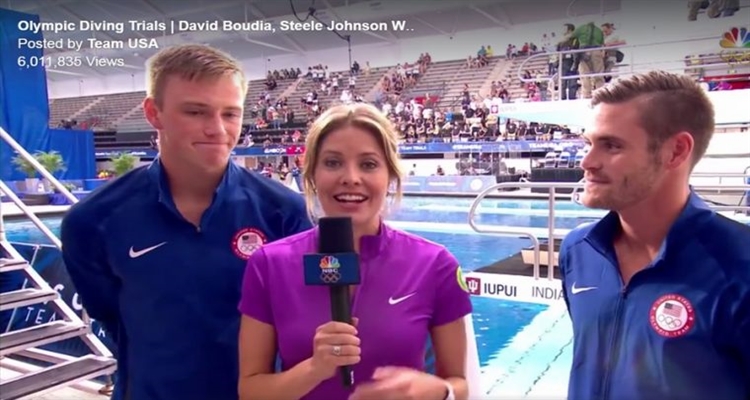 Life Lessons are all around us. A few days ago it was Senator Cruz who had the opportunity to demonstrate a Christ-first approach to life. My Unsaid Sermon post addressed that.
Yesterday, it was David Boudia and Steele Johnson who had their opportunity. Unlike Senator Cruz, these two guys hit the ball out of the park!
We were watching the Olympic broadcast and saw these two dive. Since I don’t follow the diving world, I didn’t really know much about David Boudia and I’d never heard of Steele. But in the few minutes of Olympic and world spotlight that was theirs, I learned all I needed to know.

After their final dive, the camera was briefly focused on the two divers and another man. I assumed the third man to be a coach. Their stance was different that the other divers who were celebrating, embracing, and back slapping. I said to my wife that it just looked like a prayer gathering.
A minute or so later a reporter had both of the divers in an interview. They siezed their opportunity to proclaim Christ to the world. And that is noteworthy for any Life Lessons post or sermon.
Rather than continue my own observations, I have included an article about these two young men from the Christian Examiner. And just for grins, my research confirmed another awesome fact about Boudia. He’s from Texas!

RIO DE JANEIRO (Christian Examiner) – David Boudia and Steele Johnson won a silver medal for the United States Monday – and then proclaimed the name of Christ to a national television audience.
Boudia and Johnson won silver in men’s synchronized 10-meter platform, giving Boudia his third all-time Olympic medal and Johnson his first.
Boudia’s faith has been well-known to the sports world – he co-wrote a book, Greater Than Gold, about his faith – although many viewers likely didn’t know much about Johnson, who was in tears after the duo learned they were second.
“There’s been an enormous amount of pressure. I’ve felt it,” Boudia, who still will compete in the individual platform, told an NBC national audience. “It’s just an identity crisis. When my mind is on this [diving], and I’m thinking I’m defined by this, then my mind goes crazy. But we both know that our identity is in Christ, and we’re thankful for this opportunity to be able to dive in front of Brazil and in front of the United States. It’s been an absolutely thrilling moment for us.”
Johnson agreed.
“The way David just described it was flawless – the fact that I was going into this event knowing that my identity is rooted in Christ and not what the result of this competition is just gave me peace … and it let me enjoy the contest,” Johnson told NBC. “If something went great, I was happy. If something didn’t go great, I could still find joy because I’m at the Olympics competing with the best person, the best mentor – just one of the best people to be around. God’s given us a cool opportunity, and I’m glad I could come away with an Olympic silver medal in my first-ever event.”
Boudia’s Twitter feed reads simply: “Follower of Christ, Psalm 115:1. Husband. Father. Olympic Champion Diver.” He won a gold and bronze at his first Olympics in 2012.
Johnson’s feed reads: “Christ Follower. 2016 Olympian. Cinematographer.”
Boudia’s book was published by Thomas Nelson and co-written with Tim Ellsworth.