The Unsaid Sermon We Must See 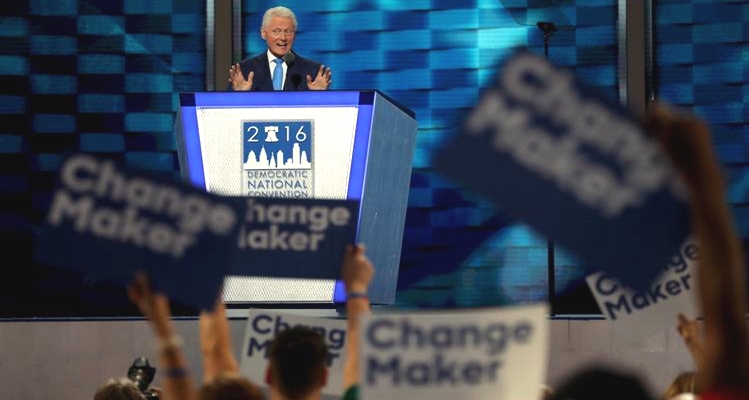 Unsaid Sermon We All Must See

Last week I posted the Unsaid Sermon the Church Must Hear. Again, these aren’t political posts. Current political events are just so full of lessons if we open our ears and eyes to them! Here is one from the Democratic National Convention.

The Unsaid Sermon: Having Your Cake

You know the old saying. I’ll organize my observations around it. Speakers at the DNC couldn’t have painted a rosier picture of our nation. According to them, everything is fine. They say every indicator of life quality is up (and of course, that’s all thanks to Democrat Party leadership). Let’s call this having your cake.
Whether everything said was true or not, it was stated to make those in power look good. It was almost painful to hear because much of it flies directly in the face of reality. Too many of us know everything is not as rosy as they said. Too many polls show a large majority of the nation feels that way. But we can always count on politicians (of any party) to do or say whatever puts them in a good light.

The Unsaid Sermon: Eating It Too 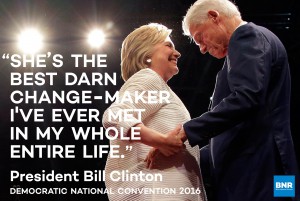 On the second night of the convention former President Bill Clinton spoke about Hillary (see comments above!). He had quite a bit to say about his wife being an agent of change. If you watched him speak, you saw many signs like the ones in the cover photo. If you know nothing else about the DNC, this is enough for a great sermon!
The inconsistency is like the elephant in the middle of the room that nobody wants to talk about. If everything is as wonderful as the speakers assured us it is, why would anyone need an agent of change? Wouldn’t it be in everyone’s best interest to just let the good times keep rolling on?
It gets worse. If an agent of change is really needed, doesn’t that mean the speakers all lied when they said everything is wonderful? And since the speeches are all carefully planned and orchestrated, wouldn’t that mean the lies were intentionally delivered? The sage wisdom holds true:

You can’t have your cake and eat it too!

It’s one or the other. Everything is good or we need an agent of change. It can’t be both. Even so, we are left to grapple with those who purposefully mislead. All of this is so easy to spot in the political arena. We see it and many find it easy to laugh. Don’t let that smile get too big!

The Unsaid Sermon: An Example To Avoid

Is there inconsistency in the lives of Christians? Do we always talk and act like kids of the King of Kings? I Corinthians 10:11 tells us:

Now these things happened to them as an example, and they were written for our instruction, upon whom the ends of the ages have come.

Paul is talking about Old Testament characters. Why were their life stories preserved? They are our examples. We see lives worth emulating and we see examples to avoid. Most often we can see good and bad examples in the same life. Think about King David. His life contains many good examples for us to follow. His life also contains some poor examples we should avoid.
Now what about those politicians who are always putting their best foot forward? Surely that doesn’t happen in the Church. If that’s true, why would Paul’s next statement be:

Therefore let him who thinks he stands take heed that he does not fall.

See it? He thinks he stands. Can you stand on your own? Do you like to present yourself in that light? Isn’t it really true that apart from Him, you can do nothing?
Then there is the change agent thing. But folks in the Church don’t usually think change is needed. Too many Christians believe ‘I have it all together’ so ‘I am good enough just like I am.’ Just like the signs at the DNC, that flies in the face of reality and logic. It’s also a lie. When writing to Timothy, Paul spoke of people who have that attitude. You know how he characterized them? He said:

They have a form of godliness but deny the power thereof.

The truth is, Jesus is the only genuine Change Agent in the universe. He changes people from the inside out. Maybe the Christians need a reminder that none of us ever have it all together. Our smugness needs to be replaced by service. How? Lose the ‘I am good enough just like I am’ and start giving and meeting needs around you. Minister to those who can’t do anything for you. After all, Jesus said if we want to be great in His Kingdom we must become the servants of all. That’s an instruction not heard at any political convention.
Serving is the only way possible for one to have cake and eat it too. Of course the ‘cake’ is our lives. If we will lose our life for His sake, He promises us we will find it. Furthermore, He will give life that is abundant, and that life is a consistent life! Think about it.