The “Miracle” At San Pedro 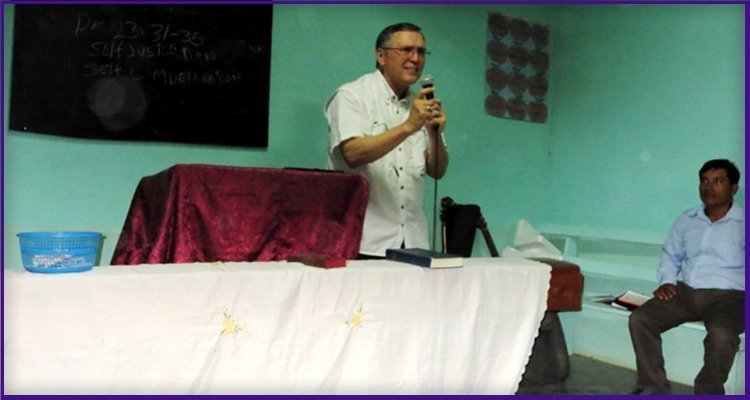 What is a miracle? It could be described many ways. But my working definition for this piece is: A miracle is something out of the ordinary. And that definition is why there are quotation marks around the word in the title. Before we jump in, the previous post will be helpful in gaining a little perspective.

As noted, the thriving San Pedro church is meeting in what used to be a bar. I said they reclaimed the building for good! But how did that happen? And what miraculous things have made it possible? 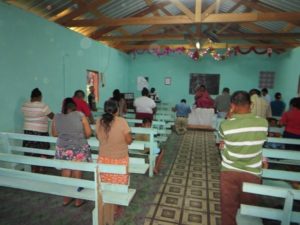 Before Wednesday services at San Pedro

There are several threads, or pieces, to the San Pedro story. The building is today’s focus. Pastor Juan and Pastor Manuel filled us in last week. The church had been praying about a place to meet. Various times had been set aside for fasting and prayer. That’s the method.

The bar was a potentially good site for two reasons. It sits on the main road. That’s good for visibility and easy access to the property. But the entire property is fairly large. So purchasing the site meant a usable building as well as plenty of space to do other things in the future.

Pastor Manuel gathered information on the property and its owner. After a lengthy time of prayer, he approached the owner about purchasing the building and surrounding land. And keep in mind he posed his question on the strength of prayer, not the amount of money available to the church for making a purchase. Fact: they didn’t have any money.

Manuel said he asked the price of the property and nearly cried when he got the answer: $50,000.00! But he thanked the owner for the information and left. What did he do in response? I’ll tell you. Bur first, what would you do? How do we respond when presented with the impossible? Just ponder that a minute. Juan and Manuel called the church back to prayer. They had prayed their way to asking the question and they were going to pray their way to a solution.

After more prayer, Manuel went back to the bar owner and asked again. He explained to the owner how they wanted to use the property if the church could buy it. He further laid out the benefits to the community of the church having a permanent ministry center. Before I tell you the outcome, I want to remind you that the only difference in the two conversations was more time in prayer and Christians being further convinced that this property was to be their base of ministry.

And prayer often needs some steps of faith. Check out Matthew 10:1-5 and following. Then see Luke 10:1-5 and following. You’ll see some familiar words. Jesus told His disciples to pray to the Lord of the Harvest to send forth laborers. And without pausing, He then said to them: Go... One thing that teaches us is we are sometimes called to be the answer to the prayers we pray. That’s another discussion.

This was all going on around the time Juan and I were talking about getting him a motorcycle. God provided that need. I knew the church in San Pedro needed some funds to purchase property. At that time, I thought they just needed $1,000.00. I published that need and asked people to pray. Within a week I had been given the $1,000.00. It was wired to Juan and the church got their property. That was my complete understanding of the situation at the time. Communication is often unclear and it’s always infrequent. That happens with folks who live off the power grid! But God was, and is still, at work!

It was amazing for me to hear all the parts of the story I had not known. And to be honest, I wasn’t as taken with the ‘what’ of the story as I was the ‘how’ of God’s people being faithful in prayer. We’ll come back to that.

The situation today, after learning all this last week, is the church needs about $1,750.00 U.S. in order to fully pay off the property. While they have been paying off the purchase price, they have also been buying materials for renovations and new construction. More about that in another post.

Another way to see a miracle in San Pedro happened on Wednesday night. I was invited to preach to this congregation (cover photo). What a moment! They are the latest chapter in a work of faith that began 7 years ago. I shared the story with them and what had brought all of us to that moment. This church is just one that is a direct outgrowth of the Kingdom investment so many have made. It was stunning just to be in the building and see the church gathered inside to share worship, prayer, and the Word. And that’s not the only way to see a miracle in San Pedro.

I have a couple of observations. Has God done miraculous things in and through this new church? Absolutely. It’s easy to see what He has done and overlook how it was done. Several times Juan and Manuel mentioned that they had no help or denominational backing to help the work in San Pedro. Their constant tool and activity was prayer.

Jesus told us to Ask, Seek and Knock (see Sermon on the Mount). And then we read in James 4:2-3 that we have not because we ask not. Has God changed? Does He still work miracles? Yes, He does. And I’m thinking we might see many more things we would call a miracle if we were consistent in asking. God has obligated Himself to respond to the requests of His children. I can’t fully explain that, but it is a clear truth in Scripture.

Finally, let get back to our working definition of a miracle: A miracle is something out of the ordinary. The truth is, what is happening in San Pedro ought to be an everyday occurrence in every church. Why? Because Ephesians 3:20 was spoken for every believer and the God Who can do exceedingly and abundantly more than we can ask or imagine is the God Who is the same yesterday, today, and forever. All that being true, maybe the greatest tragedy in our lives and ministries is our lack of asking! And that’s why I wrote “miracle” in the title. Think about it…