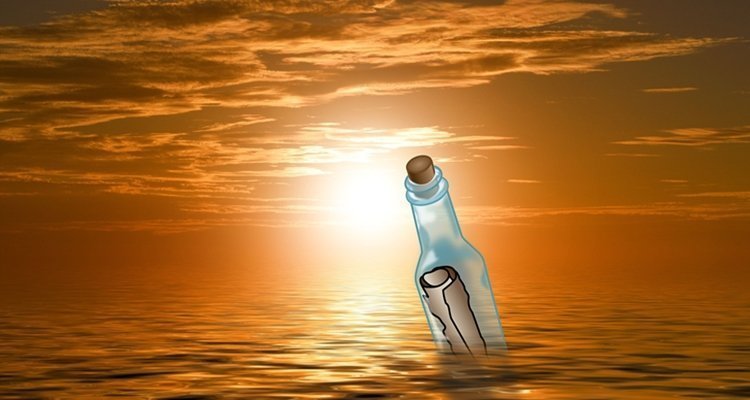 The message is in the details! This series began with a reminder of the Trivial Pursuit game. And we’ve begun to unpack the huge lessons in what may seem like the trivial details of Scripture. Another example I won’t deal with here is the shortest verse in the Bible. What is it? See John 11:35. And if you think Jesus wept because Lazarus died then you’ve never learned the lesson in the details! But now, back to my message in a bottle – I mean, manger!

Every detail surrounding the birth of Jesus is meant to communicate to us. That becomes increasingly clear as we peel back the layers of Luke’s account.

As previously noted, a manger is where the animals eat. A manger is not sanitary. You would not want to put your food in it. And I am sure you wouldn’t want to lay your newborn child in a manger.

Joseph probably cleaned the manger as best he could. And if you’ve ever been around farm animals you know the hay harbors many things. I won’t go further than taking note of the insects that find a home in the hay.

Mary placed the King of Kings in that dirty manger. How is it this King had no pillows, no royal maids or clean, soft blankets? But these were not random, unfortunate circumstances that caused Jesus to sleep in the hay. To think otherwise is to miss the message in the manger. Other details confirm this. And they will teach us a great deal!

We’ve already noted that God does not do random. That’s one message of the manger. And we see it in Luke 2:7. Did it just happen that the inn had no room? Let’s see if that idea holds up.

God created the universe in six days. He rested on the seventh day. That communicates God’s awesome power in terms we can understand. The account of Creation tells us all the miraculous things God accomplished during each day. How does that relate to Jesus’ birth?

Micah was a contemporary of the prophet Isaiah. Isaiah 7:14 and Isaiah 11:1-10 were also about 7 centuries before Jesus was born. Now, connect that back to the days of Creation. God couldn’t do things incorrectly. So it’s not that He needed 7 centuries to prepare all the details of Jesus’ birth. But so that we can understand, just look how much more time there was for God to plan things to come out just as He intended. It’s staggering. NOTHING was random.

So we can safely say that Jesus appeared on the earthly scene at just the right time, in exactly the right place, among the right people, in the right family, and in all the ways God intended it. And that sets up something I often challenge people to do as they study Scripture. Ask yourself: What could God have done? Then compare that with what He actually did. The comparisons can be insightful. And that’s the case with the manger.

Could God have chosen a place besides Bethlehem? Yes. But Mary and Joseph were from Nazareth. Why didn’t God choose Nazareth as the birth site? What if Mary and Joseph had relatives in Bethlehem? That would have provided a warm house, a helpful mother or older sister to assist with birth, and a bed for Jesus. It could have been that way but it wasn’t. But these are not problems in God’s view. It was nothing for Him to arrange world events (a Roman census and taxation) to move Mary and Joseph from Nazareth to Bethlehem. He took them to an inn that was full right into a dirty stable and an unsanitary manger for Jesus.

It might have been another way, but it wasn’t. So inquiring minds should wonder why God wanted His Son born in this place and time and resting on dirty hay.

If you know anything about my preaching, teaching or writing style it is this: I love the object lesson. Many of us are visual learners. Object lessons make things understandable for simple minds like mine. The message of the manger is an object lesson. The ‘trivial’ details bear this out. God’s messenger told the shepherds the manger was a sign. Notice Luke 2:11-12 –

Today in the city of David there has been born for you a Savior, who is Christ the Lord. This will be a sign for you: you will find a baby wrapped in cloths and lying in a manger.

The message of the angel was verifiable by a manger. Every child in that day was wrapped snugly. We still do that but the materials are much softer! The snug wrapping gives the infant a sense of comfort and security. After all, he’s been in a pretty tight place for 9 months! Snug wrappings make him/her feel at home. So that wasn’t anything unusual. But a manger…? What parent puts their newborn in a place like that? Well…God did! And there’s something else about that message.

As soon as the angel had spoken, the heavenly celebration was echoed across the night sky by thousands and thousands of the heavenly hosts. See it Luke 2:14 –

Glory to God in the highest, and on earth peace among men with whom He is pleased.

That celebration was heard by the lowest rung of Jewish society. It wasn’t given to the preachers or the princes. It was heard by shepherds. Now, hear it in light of the details we know:

From the highest heaven to the lowest of the low the glory of the Father was celebrated, proclaimed and shared. That’s what we see in those anonymous shepherds. They are there as an example to us.

Did you ever stop to think what it meant for Jesus to leave heaven? Our minds can’t comprehend the majesty and glory of that place. John’s descriptions in Revelation say heaven is like… He had no words. Jesus left the place of absolute glory and majesty to step into earthly life. It’s a sacrifice beyond our comprehension. But that doesn’t mean we shouldn’t try.

In Luke’s account of Jesus birth we see Jesus on a bed of hay. But if you trace his life you see two other references to Jesus and sleep. In one, Jesus was asleep in a boat while His disciples worried. The other is when Jesus told a would-be disciple that the Son of Man has no place to lay His head (see Luke 9:57-58).

The difficulty of Jesus’ life began with the first step out of heaven. That step landed in a manger. And Jesus’ downward journey to the lowest of the low ended at Calvary. This progression is noted by the Apostle Paul in a passage many of us can quote. It’s Philippians 2:5-11. Jesus took upon Himself the form of a servant. Isaiah foretold Him to be the Suffering Servant. He became obedient unto death, even death on a cross. That is a long, long way from the splendor of heaven!

The manger was a hard place. It was unexpected but not unplanned. It was a symbol of the life Jesus would live for the Father’s glory and our salvation. And that manger is in keeping with Jesus’ first sermon: The Sermon on the Mount (Matthew 5-7). In that sermon Jesus spoke of the wide gate and the broad path. And He also said there was a narrow gate and a straight path. The narrow way is a hard way. A manger is absolutely appropriate as the beginning place of the life Jesus lived. But there’s another thought.

As we were teaching our way through the Sermon on the Mount a thought was pushed into my mind. How wide is the narrow gate? I’ll go ahead and admit that we are not told. However, in light of what we do know, the thought was this:

It’s just wide enough to get your cross through

That is the measure and means of discipleship. I take up my cross and follow Him. I might be able to get my yacht and other toys through the wide gate. And that’s a good picture of what it means to serve the right master (also part of Jesus’ sermon!). Because the one who is on the straight path with Jesus has given everything to find Him, the Pearl of Great Price. And even though the way is hard and the path is narrow, there is great joy in walking such a path in the Savior’s presence for the Father’s glory.

Now, see what a message there is in a manger!

Remember the first post in this series? If not, see it here. And don’t miss the connections going forward. Stay tuned!