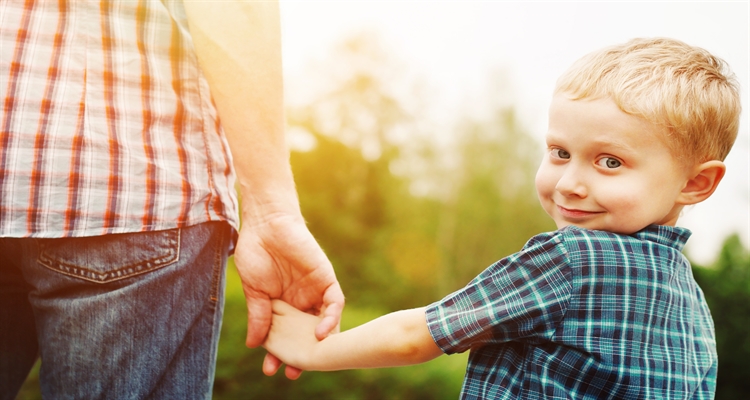 Father’s Day: How We Honor Dad(s)

Is Father’s Day just a Hallmark Holiday? The cynics we know and love would quickly say, YES! Regarding our calendars, that may be the case. But there is something much deeper about honoring one’s father and mother. I know this because it is God’s idea:

Children obey your parents in the Lord, for this is right. Honor your father and mother (which is the first commandment with promise). So that it may be well with you and you may live long upon the earth.

I have three goals with this post. First, to honor my father. Yes, Ephesians 6 and Exodus 20:12 say to honor both our parents. Since this is Father’s Day weekend, I’ll focus on Dads. In doing so, my second goal is to encourage you about honoring your father and mother (regardless of your age!). Finally, we should see in this command a direct connection to honoring our Heavenly Father.

As I said, Dads get some bad press. But whatever your father was/is, he did things from which you benefit. Even if he was a poor example of God the Father, you see things to avoid. That in itself is blessing if you allow it to be so.
Even the best of earthly fathers are not perfect. My dad is not perfect and I have not been a perfect father. As simple or obvious as that may sound, we must each recognize that truth. We must teach it to our sons and daughters. They need to know that we know:

I am not perfect, but I am doing my best to give you a Godly example.

God’s ways are not our ways.

My Dad taught me this truth from the book of Isaiah. We didn’t sit down and have a Bible study about it. 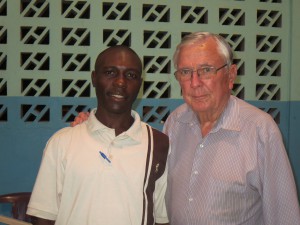 Evening Class – Dad and Pastor from Via Progresso

I saw that he believed this and I heard it in his preaching. Yes, my Dad is a pastor. That has its own parental challenges. It also has kid challenges.
Challenges aside, I learned this invaluable truth. God is not obligated to do things I think He “should.” He does not have to conform to my expectations. If He were to do so He would become a very small god (yes, little “g”). He is not required to fit into a Baptist box, a Methodist box, a Presbyterian box, or anyone else’s box. He is Himself, and that is more majestic than any of us can imagine!

Whatever your hand finds to do, do it as unto the Lord.

Solomon’s wisdom was lived in front of me. To work hard and do the work well was just the way things should be. Like most kids, I tried the ‘just enough to get by’ route, but it never worked. Not only did this truth serve me well as an adult, it is a way reflect the glory of our Father. Our Heavenly Father NEVER did anything second best! Think about it. And when we give that example to our children, they can see that whatever God has in store for them they can trust in His complete goodness. That is an incredible gift. It takes some of us longer than others to realize that.

Humble yourself – God gives grace to the humble.

One incident from my childhood embodies this principle (and others!). This instruction is given by James and Peter. What I saw is one of those ‘burned in my brain’ kind of memories. As I recall, it was a 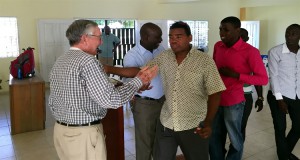 Dad being greeted on his birthday by Dominican pastors

Sunday evening church service. Dad gave the altar call and he was the one who came. He came to confess to his congregation. It was no lurid confession of immorality or anything like that.
As one still in grade school, I certainly didn’t understand it all even though I still remember some of the words. He confessed a failure of his heart toward his congregation. He acknowledged to them that he had been faithful to speak the truth of God’s Word from the pulpit. His failure, and the confession, concerned the attitude with which he spoke the Word. As an adult pastor, I know only too well how easy it is to be frustrated with hard-hearted, hard-headed church members (this goes all the way to Moses and the stiff-necked generation he was called to lead!).
The confession was for not speaking with love. That is a Scriptural command. So much flows from that scene. We are to confess our faults one to another. When was the last time you saw some of that in a church service? And does the Word apply to all the people, or just the people in the pew? There are far too many pastors focused the ones in the pew and not the one in the pulpit.
Another item is service. Dad’s obedience in that Sunday night scene etched in my mind the idea that pastors serve the Lord and His Church. We are servant leaders who are called to love sheep and wash feet. The contemporary idea of the Church serving pastors is not God’s idea. That it is as widespread as it is gives testimony to the Church’s lack of understanding about the role of God’s undershepherds.

In all your ways acknowledge Him and He will make your paths straight.

That’s what Dad was doing. It made a difference for me even though he wouldn’t see for quite a few years. And whatever your Dad was, he probably did some things right. So God says we should honor our fathers and mothers. As little children that means to obey. From there, it means to value and revere the contributions they have made to your life. It’s far too easy to find their faults and cast blame. It’s much better, and it’s an act of Godly obedience, to see how God used them to influence your life. And even the negative examples are worthy teachers. In all things, not necessarily for all things, give thanks!
What to do this Father’s Day? If this hasn’t been your habit, Acknowledge Him in all your ways. If it has been your habit, keep it up!!! Your children will see that. It will make a difference. And as the Word says about Mothers, your children will have reason to say they are blessed because of you!