Sweat! When you wipe your forehead or your face do you think of sin? Probably not. But maybe you should! In a previous post we saw just one aspect of sin’s effect on the ground (see post). So how is sweat part of Good Friday?

Genesis 3:19 says, By the sweat of your face you will eat 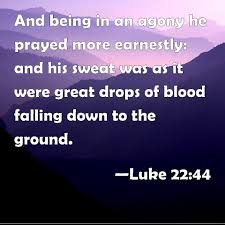 bread until you return to the ground. In other words, Man’s labor became tiring and toilsome due to sin. Does that give any insight into, TGIF? Work is over. We get a break.

This aspect of sin’s curse was met by Christ. The sweat of His brow was greater than any man’s. As He was preparing in prayer for His crucifixion, Luke 22:44 tells us:

He sweat, as it were, great drops of blood.

The other effect of sin on the ground also contributes to Man’s toil and sweat. Before Adam and Eve sinned there were no thorns or thistles. God decreed them to grow as part of the curse of sin (Genesis 3:18). Man had to sweat to overcome the thorns, thistles, and weeds so he could grow the things fit to

As Jesus stood before Pilate on that first Good Friday, the Roman soldiers mocked Him. Their mockery included a crown of thorns (John 19:2). Think about that. The King of the universe was crowned with the very emblem of Man’s sin. Incredible. Jesus took upon Himself the penalty for my sins and for yours.

All the requirement of Equipping For Life were met by Jesus. It’s no wonder we call it Good Friday!