If The Horse Is Dead… 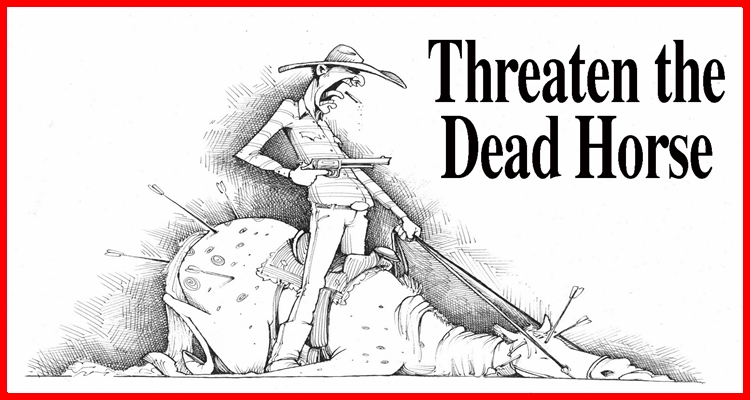 If The Horse Is Dead…

What good is a threat if the horse is dead? Why does the thought make us laugh? Genuine humor is rooted in reality. And this piece of sage wisdom brings humor to reality. How often do we find ourselves riding the dead horse? We see it in politics, government, and our personal lives. And the most unfortunate place we see this error is in the Church! 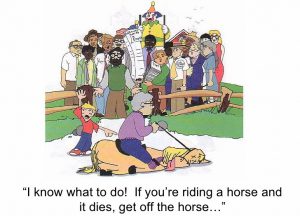 Church: The Horse is Dead

To be sure, the Church is not dead. But can we say the same for our methods? Our methods are often the dead horses we ride. We can be shining examples of the classic definition of insanity:

Doing the same thing over again expecting a different result!

It’s possible to give statistics to prove this point. What I’d rather do is show you some people who realized the horse is dead. They didn’t keep doing the same old thing. Thinking outside the box can lead to an innnovative, workable solution. But the solution is never to:

If The Horse Is Dead: Innovate

I shared a post about the mission efforts of a persecuted church. That came to mind when I saw the following post on Christianity Today. I don’t know enough about this very innovative attempt to evangelize a city. But as I read the piece, I thought of three things:

Why the last item? There are two reasons. First, we need only look around us to see we have not been 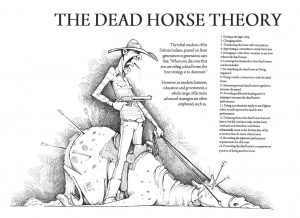 very effective at being salt and light. Second, if we are to meet our mission of making disciples, things must change. What we have been doing isn’t working very well. If horse is dead…dismount!!!
If we try something different, and it doesn’t work, then we need to be willing to call it ‘research‘ and move to the next idea. Edison documented thousands of ways NOT to make a light bulb before he found the idea that worked! Our message can never change because it is the Gospel. But how we engage our culture with that message must change.
Take a look at the piece linked below. It will challenge you. If they post updates on future progress, I’ll try to alert you. While that might be interesting, the more important thing is this: What dead horses do you need to leave behind?

What started as a pastor’s unorthodox ‘community outreach’ is now bringing strangers together in the name of narrative.
Jennifer Ditlevson Haglund CINCINNATI — What do a middle-aged transvestite cabaret performer, a millennial adoptee from South Korea, a former prison inmate, and a city councilmember all have in common?

It may sound like the beginning of an off-color joke, but it’s a serious question that the co-founders of Cincy Stories can answer, because they’ve met each of them.

Executive Director Shawn Braley and Creative Director Chris Ashwell know that these people—with such diverse interests and backgrounds—share geographical space in central Cincinnati. That’s not where their connections end, however: They all have stories to tell and much to learn from one another.

The idea of a storytelling event series began in November 2014, when Braley, a non-denominational pastor, was brainstorming about connecting with his unchurched or “de-churched” neighbors. He knew they wouldn’t be interested in any religious activities hosted by Sanctuary Over the Rhine, a church plant Braley co-leads. He would have to find another way, and it might not look like anything he’d ever seen a church do.

Braley said listening to StoryCorps and The Moth podcasts—hearing strangers’ stories that caused him to empathize with those whose lives looked much different from his—inspired him to consider another approach to community building and outreach. Braley and Greg Knake, a fellow leader at Sanctuary OTR, hosted the first Cincy Stories live event at a nearby pub on February 3, 2015. That night, Knake and Braley saw potential in recording and sharing the stories from the stage. That’s how Ashwell got involved.

At the time, Braley worked at a restaurant with Ashwell, but they didn’t spend time together outside of work. That changed when Braley asked if Ashwell would be interested in filming one of the events. Soon after, the group began asking how these life stories might generate interest and affect change in their community.

‘You Still Let Me Tell My Story?’

In 19 months, Cincy Stories has expanded far beyond their expectations. They now host a website and YouTube channel with archived footage of live events and stories produced from individual interviews. In June 2016, with the help of a grant from a local foundation, Cincy Stories opened an interactive story gallery at a newly remodeled storefront in the Trevarren Flats development in Walnut Hills. Through various media, the space showcases stories of the people who live and work in the neighborhood, and it also houses a “story booth” for recording. Visitors can drop in for free coffee, water, air conditioning, and conversation. On occasion, Cincy Stories partners with local vendors to provide free meals, and periodically they host listening events. (link to remainder of article)