Faith: Can I Trust Others?

The immediate response to the title question is probably, NO! Why? Being let down is one of the life lessons we have all had to learn. Now, at some level we must trust others because none of us serve the Lord as a Lone Ranger (see earlier post). But when it comes to trusting others, what is the real object of our faith? Failure to answer this question will make us suspicious of others. That, in turn, will minimize our effectiveness in God’s Kingdom.

Life Lessons: Know the Object of Your Faith

Let’s use two examples as tools for understanding. The first is the Apostle Paul. Acts 9 records his conversion on the road to Damascus. Saul, later named Paul, was on his way to round up Christians for persecution/execution. God struck him with blindness and sent him to a believer in Damascus, a man named Ananias. This man was instructed by God to pray for Saul. Neither of these men had any reason to trust the other. Before the Damascus road conversion they would have been bitter enemies. Christians feared a guy named Saul and Saul hated every Christian he saw.

Faith brought Ananias and Saul together. Each was obedient to God’s instructions. Even so, Ananias expressed his apprehensions in Acts 9:13-14. It is very evident in this account that Paul and Ananias were trusting God, not each other.

Life Lessons: Seeing God in Others 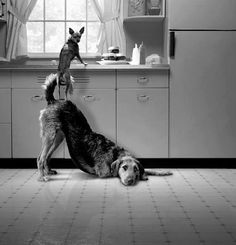 It seems Barnabas had an easier time seeing God in John Mark than Paul did. That obviously changed by the time Paul wrote 2 Timothy. That was one of Paul’s last letters. Timothy was to visit Paul in prison. Paul asked Timothy to bring Mark with him.

Faith, the Lone Ranger, Paul, Barnabas, John Mark, you and me; what’s the point? Our perspective on the world is oriented around me. It’s easy to understand why people used to believe the sun revolved around the earth. That’s how we see life. Unfortunately, that’s how many people see God’s calling on their lives. The thinking is something like:

God has called me. Now, what must I do and how will I do it?

The truth is, God calls us to a community of faith. Second, His call is for us to serve through a community of faith. When Paul answered God’s call on his life, he had no idea all the people who would be part of his ministry. There were many! The point is, God called those people just as He called Paul. As they came into Paul’s life and ministry he had to trust God in them.
Not all those people let him down like the young John Mark. And human frailty is just one difficulty of faith. We are tempted to say:

Well, I trust God — I am not sure about trusting you!

The problem with that is this: God is just as much at work in other believers as He is in you! Nobody ever said faith was easy. This is just one more reason why it’s difficult for us.

The next post is a continuation. It will be as much about my personal confession as it is an insightful example of trusting God in others. Til then…