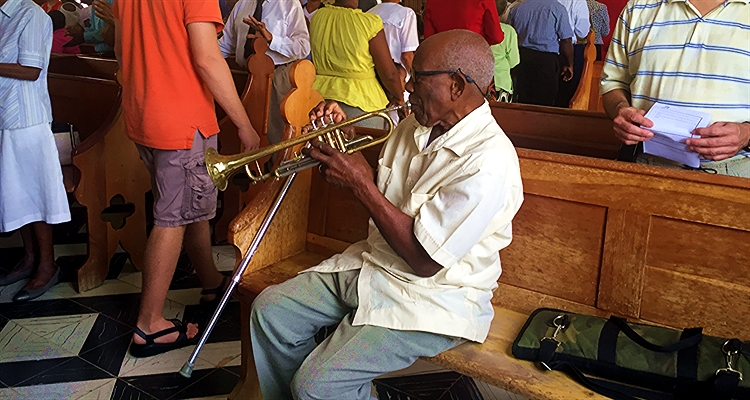 A Blessing In Samana

Sunday morning I went to worship in Samana. A surprise blessing awaited me. It came through a man named Lincoln. This is his story.

The music was in full swing as we walked up to Saint Peter’s church. I could hear the singers and the 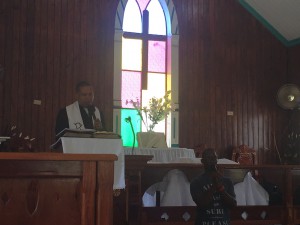 band. I paid particular attention to a trumpet. I’d never seen any brass instruments used in their worship services. No matter, I was enjoying what I heard.
The singing continued as we walked in. A couple from our mission team was sitting near the front. There was an empty seat by them and I walked up and sat by them. Right in front of me was Lincoln. And he was going to turn out to be my great blessing of the day.
At this point, all I knew about him was that he was getting on up there in years. I also knew he played the trumpet. I think I had been guided to that seat. The trumpet I’d heard from outside was Lincoln’s trumpet. He wasn’t on the other side of the church with the rest of the band. He sat alone on this front seat and played every song. 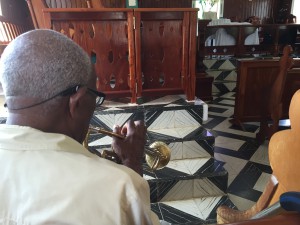 Lincoln would listen to the singers begin, then make a tuning adjustment on his trumpet, and he would join in the song along with the rest of the congregation. He would play the melody. Then he would play harmony. He did all this without any music. It seemed music just flowed out of him.
Lincoln had a walking stick. You can see it in the cover picture. I thought maybe he was blind. Many blind people play instruments and obviously don’t use printed music. Lincoln was not blind. A Dominican friend told me his sight was not real good anymore, but he could see. 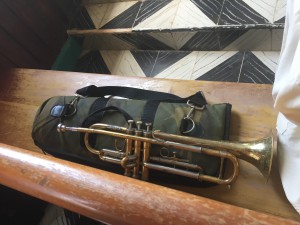 As we stood to sing most of the songs, I noticed Lincoln’s camo case on the pew beside him. I’m fairly certain that case was meant to carry a short firearm of some kind. It didn’t matter. That was Lincoln’s trumpet case.
I also noticed his trumpet. It wasn’t new. It wasn’t all that shiny. It may not have brought much if it had been sold. None of that mattered. Lincoln knew how to play that trumpet. He seemed to make it sing when he played. It reminded be a great deal of the story we know as The Touch of the Master’s Hand.
Lincoln was doing something more people need to do. No, I don’t think everyone should be playing a trumpet. Lincoln was praising the Lord with all he had. He was a blessing to all in the worship service.
Lincoln also had fun. Near the end of the service the congregation walked the aisles of the church to given their offerings. A song was sung as the people walked and of course Lincoln played. The video below captured him having a little fun with one of the people who walked by him.
Lincoln playing in church service (click link to play video) 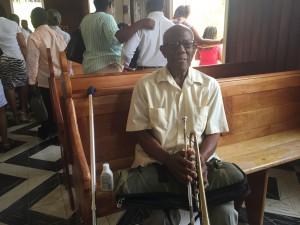 After church I spoke with Lincoln. He has played for 35 years. He does it every Sunday he can make it to church services. I told him how much I enjoyed his playing and that made his smile widen just a bit. I asked him for his picture because I knew then that I wanted to write this piece about him.
Somewhere along the way, Lincoln learned the truth of Ecclesiastes 9:10 –

Whatever your hand finds to do, do it with all your might…

And by the way, I learned Lincoln is a nickname. I don’t know why or how, just that it is his nickname. He said his given name is George. So a take a lesson from a talented, cheerful, servant of the Lord who lives in Samana. Bless the Lord and others by doing what you can do with all your might for His glory!