Working in missions means being a student of culture. In this case, it’s the Dominican culture. And even here, the more I learn about a culture tells me there is still more to learn. This came into focus with my Dad’s birthday. 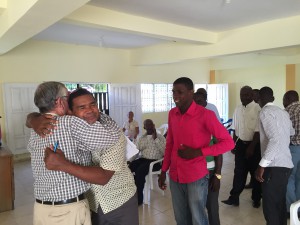 Distance keeps us from being together on many important days. When we planned to be in Barahona this week to teach pastors, I knew Dad’s birthday would fall during our time in the Dominican Republic.
When I opened the morning class session with the pastors, I told them we had something to celebrate. Then I mentioned his birthday. I was not prepared for what happened next. It was standard birthday procedure for them, but it was a surprise to us. 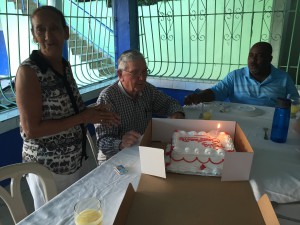 When I mentioned his birthday, they spontaneously began to sing and clap. That was the first surprise. The second was all of pastors forming a greeting line. Each of them had to hug my Dad and tell him Happy Birthday. We now have some long-term relationships built among these pastors. Their interest in him and their expressions of goodwill were sincere and moving.
That caused a bigger delay in the class schedule than I had intended, but it was worth the time spent. We worked our way through the hours of teaching. After we arrived at the Mission House, we had a little down time before dinner and an evening section of classes. 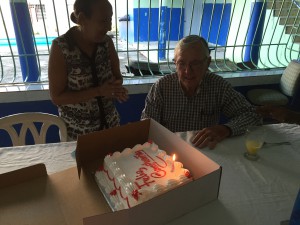 The day before, I had ordered him a birthday cake. Before dinner, I ran back to the bakery and picked up the cake. Our hosts all knew about the cake and the day, but Dad didn’t know anything was up.
As we were eating dinner, a church committe began on the other side of the Mission House dining room. But when I brought the cake out, a scene very reminiscent of the morning unfolded. The meeting stopped, there was singing and clapping, and there was cake for everyone! Pastor Pedro had been in that committee meeting but moved to our table for the celebration. It was a good day. 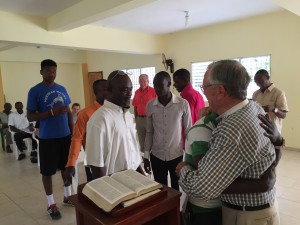 And all of that is evidence that God is the Giver of every good and perfect gift. The time was special and we could never have anticipated how it would all come together. But it was a blessing to see these special people show their affection to someone they have come to love.