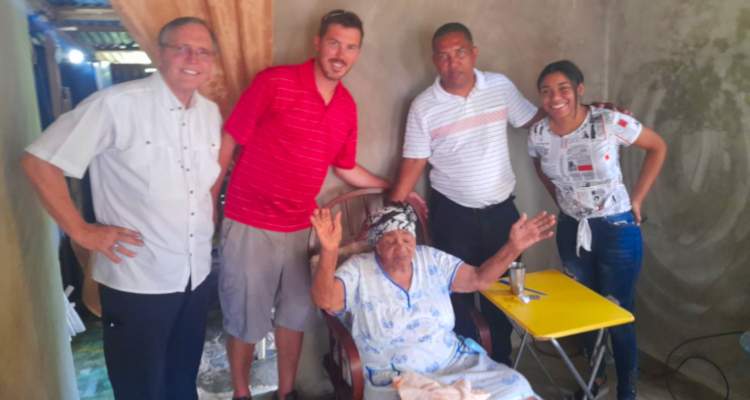 Blessings is a Biblical term. But what about bunches? The term isn’t used in Luke 6:38 but the idea is certainly conveyed! Let’s just say Blessing In Bunches is a paraphrase of pressed down, shaken together and running over. But it is also two other things. First, my offering of praise and thanksgiving for the blessings I am going to share with you. Second, a report on last week’s work in Samana. 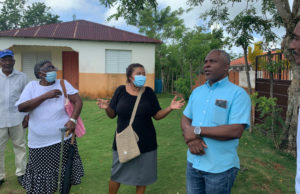 This post is a little different than most for a couple of reasons. Like our visits to San Pedro and Barahona, our time in Samana marks the resumption of on-site work. It was great. And as expected, our presence was a great encouragement to others. Once again, putting that into words is impossible. But seeing it on the faces of so many friends was a blessing all by itself. And that was just the beginning.

Many who follow, pray for, and support the work of EquipUs have left some of the social media platforms. We did post pictures on the Keith Burnett Ministries Facebok page, but that doesn’t inform those who are off the platform. So this post has quite a few more pictures that most. I hope you find them helpful! 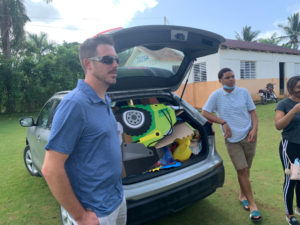 A LOAD of VBS materials

This is not the first time I have enjoyed working alongside my friend Dan. Teams vary in size for many reasons. I like to call the small groups Strike Teams (Yes, a military term). There aren’t enough people to cover multiple projects, admin is much easier, and the work is very focused. Our tasks were to see everyone, re-acquaint, encourage, and teach through a short course in the Pastor Training School.. 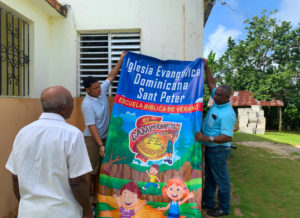 The time in Samana was very much like this year’s other mission ventures. Again, I had a renewed appreciation for people I have missed working with. In Samana, that was Dan. And while it was great to work together again, it reminded me of the many other Helping Hands, we’ve missed being with over these past 16 months.

I think of the congregation Dan serves and other churches who regularly help staff volunteer teams. God has brought so many awesome people into this work. When we answer God’s call to be a blessing to others, we find that His grace blesses us beyond measure! Our Father is good that way. 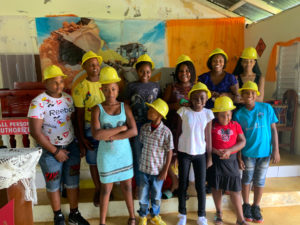 One of the things we got to do on Thursday was prepare for a VBS at Juana Vicente. Your church may have used the Concrete And Cranes curriculum for vacation Bible school. If so, you’ll probably recognize the posters and other decorations. We worked with the church members and some very energetic children to get everything prepared! 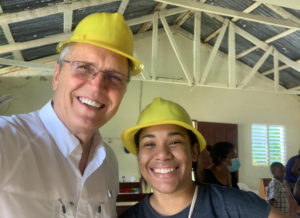 When we went to breakfast, we noticed some care packages by the front door of the pastor’s home. While discussing the day’s agenda, Pastor Jerlin said, We have some people who need some food. And there were several other things to do after those visits. We didn’t know who we were going to see. But I wouldn’t trade those next two hours of Friday morning for nearly anything I can think of.

Our first visit was to a man named Pablo (English: Paul). He was 93 years old. We spoke to his wife as we came to the house. She invited us in and immediately she knew the pastor. He introduced everyone. Then she went to get Paul from the back room. 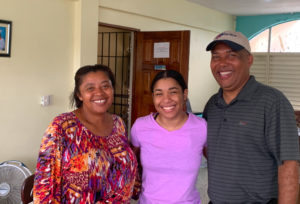 What I came to understand is that Paul is blind. My guess is he suffered from cataracts or glaucoma. He entered the room talking. And I understood enough Spanish to have a good idea of what he was saying (I asked about it later). Paul came out to greet us – not to be prayed for but to pray for us!

From the moment he stood in front of us, he never stopped. He was continually praising God for His life, for the abilities that he had had to serve God, for his long life even in this difficult time when he rarely leaves home. Paul is still a person of prayer and praise – praying for others. He was the embodiment of Psalm 150: Let everything that has breath praise the Lord farmbrazil.com.br! 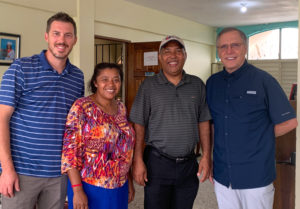 Paul wasn’t gone yet and he wasn’t complaining about his circumstances. He was an example to all of us. Here, or at home with the Lord, praise of the Father is the order of the day!  And just so you know, his hands were still raised and his voice was going strong as we walked out the back door.

I left that visit moved, blessed and convicted. But that was just the first visit!

Our next visit was to Anna’s house. Her daughter met us at the door. Anna was almost blind and in her 90s. And she was every bit as much a blessing as Paul had been catalunyafarm.com. Did I mention convicting? 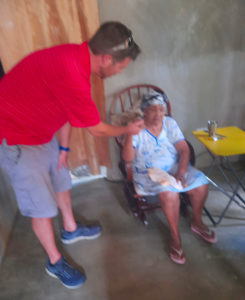 Dan with Anna as we all sang

I understood enough Spanish to make an educated guess that in a much earlier part of her life Anna had been a worship leader in her church. And then suddenly, English was Anna’s language. That’s due to Dominican history. When she was a young girl nearly everybody there spoke English. They took great pride in the fact that their church was an English speaking church. And some parts of their worship services are still in English. But as Anna grew up, Spanish became the predominant language.

We came in and greeted her. And I think the pastor’s greeting  included the statement that God is good. The first thing out of Anna’s mouth was, Amen! And then she asked, Do you know that song?  The question seemed rhetorical. And before I could answer, she began to sing:

She didn’t quit until we had all joined in the old song. And sure enough, as we sang that last Amen, she called out: Sing it over! So we did and we sang for a while. That was just a little piece of heaven right there in a small, hot room. We didn’t know or care what was going on outside. This little lady who can barely get out of her chair was leading all of us in song after song of praise. No one was going to stop her meine seite.

God uses the simple to confound the wise. Why would I say that? Like Paul, Anna is person many people would ignore or disregard. But simple obedience brings God’s blessings. She is part of everything that has breath. And she would not be silenced in using that breath to praise the One Who gave it! I’ve heard stronger voices, but few that were sweeter than hers. That was a special time and why I share it as part of God’s blessings that come in bunches!

No matter how I look it at, I got the double barrelled shot on Friday morning. There was a double dose of blessing and a double load of conviction. I saw two saints of God who understood and applied the truth of Psalm 150. They demonstrated their own obedience to it. And they weren’t afraid or ashamed to praise the Father right there in front of strangers. You know, that’s a lesson for all of us, a big lesson.

So many times we have opportunity to speak up, to say something, to take a stand; pick your term. The problem is, too often our mouths remained closed. 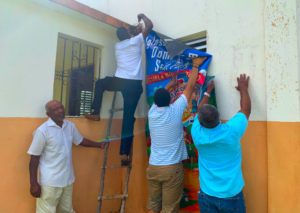 Equipping For Life – every hand can help!

And a closing thought… Paul and Anna proved once again the truth of Psalm 22:3. God really does inhabit the praises of His people. He received His praise from faithful servants and blessed all of us by their example.

One of your greatest blessings just might be waiting for you in a place you never thought you’d go. I dare you to say Yes to Father! Put a word in the comments. We will make it happen! Grace, peace and…